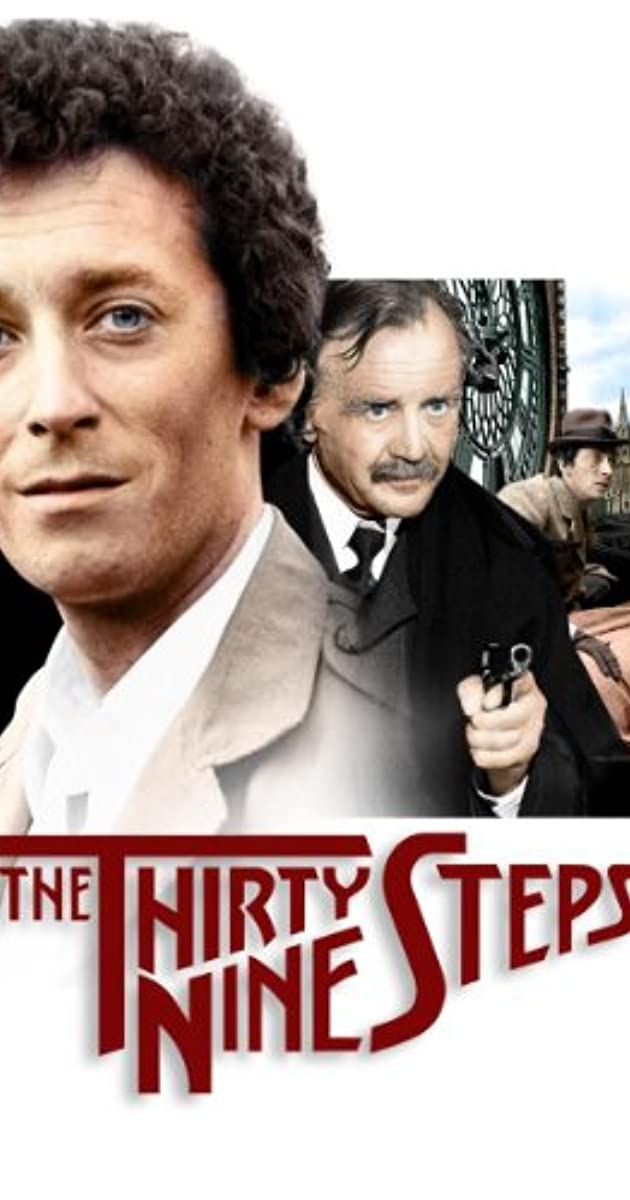 Robert Powell (Jesus of Nazareth) plays the lead character in this adaptation. He later reprises the role in the TV series Hannay in the late 1980s. Powell gives a very good performance and is physically more suited for the role of Hannay than Kenneth Moore, even though his hairstyle and some of his wardrobe seem to come from the 1970s rather than 1914. Also, John Mills appears as the freelance spy, Franklin P. Scudder. Mills is a fine actor (an Oscar for Best Supporting Actor for Ryan’s Daughter), and his role here is too brief, but appropriately so for the plot.

The beginning of the film departs from its two predecessors. In the opening scene, freelance spy Scudder is meeting on a fog-hidden boat relaying his findings and his fears to two of his superiors. They are being watched from a secluded distance by members of the Prussian Intelligence Service. The next morning Scudder discovers that one of his colleagues was murdered with a knife just after their meeting, and the other was assassinated that afternoon. This sends Scudder fleeing into Hannay’s apartment, where he asks for help. Within two days, Scudder is chased from the apartment by two members of the Prussian Intelligence. Just as he finds Hannay at the train station, he is stabbed in the back and falls into Hannay’s arms, giving witnesses the impression that Hannay just stabbed him. This scene is likely copied from another Hitchcock film, North By Northwest (1959).

The coded notebook Scudder was trying to give Hannay flew under a table unnoticed. Hannay eventually locates the notebook and begins his adventures to clear his name. His ensuing adventures differ from the book and the earlier versions in some details. Those adventures include a broader use of on location footage where Hitchcock relied more heavily upon studio shots. There is a rather amusing sequence of a drugged Hannay rolling in a wheelchair down a long hallway that is an entertaining addition to the story.

Powell is a noticeable improvement over Kenneth Moore in that he better displays the fear, desperation and physical duress that should accompany his situation.

With the help of a new lady friend, Hannay gets to the British authorities and gets them to believe his story. They discover that “the 39 steps” refers to the last flight of stairs leading up to the tower of Big Ben, and that there is a bomb set there scheduled to explode at 11:45. Hannay smashes through the clock face of Big Ben next to the “6” and climbs outside, clamoring over to the minute hand to swing from it at 11:44, keeping it from reaching the detonation point. 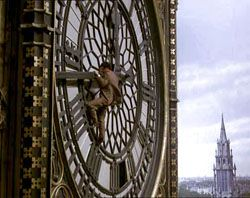 It would have been a lot easier to break through the face between the “8” and the “9” and restrain the minute hand comfortably from the inside, but that would have robbed us from the most dramatic scene in the film.

As with the previous versions, the Prussian Intelligence is foiled, and Hannay walks away peacefully at the end with the girl on his arm. 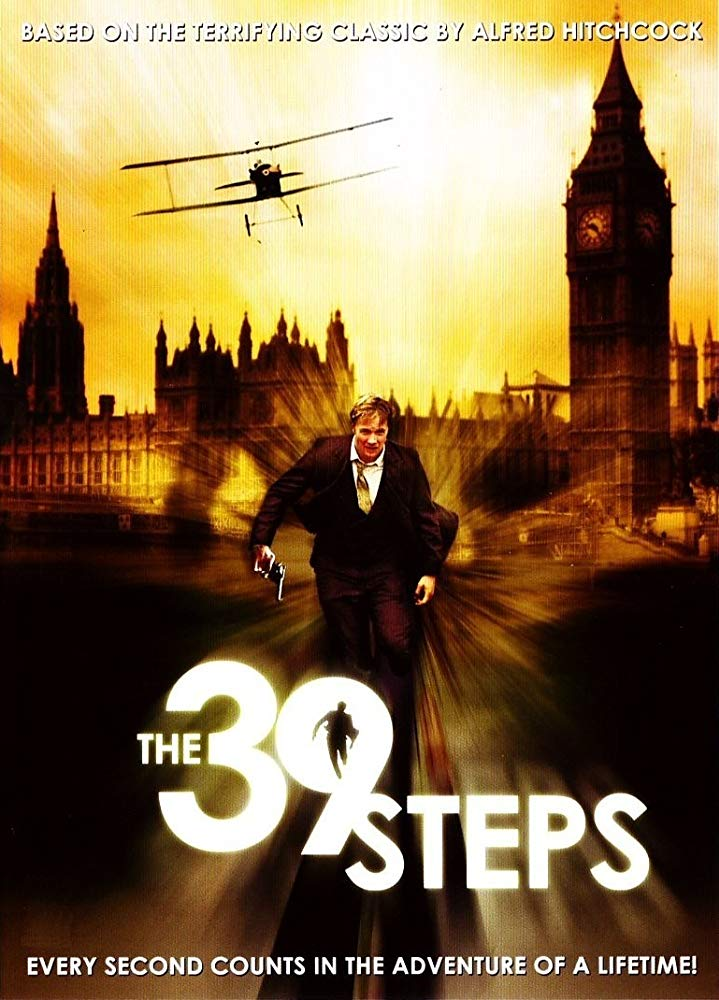 This made-for-TV (BBC) version is probably my favorite of the four. It stars Rupert Penry-Jones (The Four Feathers, Persuasion) as Richard Hannay and Lydia Leonard (The Fifth Estate, Last Christmas) as Victoria Sinclair, a suffragette who joins Hannay in his journey. It is directed by James Hawes. This film more closely follows Buchan’s novel in several respects, although it lacks some of the more dramatic special effects of Hitchcock’s original. Penry-Jones’ physical appearance probably is the best match of the four for the athleticism required by the story.

In the opening sequence, the spy is once again the male Franklin P. Scudder, well-played by Eddie Marsan (The World’s End, Snow White and the Huntsman). As with the novel, Scudder bursts into Hannay’s apartment with his tale of espionage and the threat of his being killed. Once he is in fact murdered, Hannay escapes with the coded notebook, and starts his trek cross-country to clear his name and prevent military secrets from leaving the country.

While many of Hitchcock’s special effects are not copied into this film, some very good stuff is included. In several chase scenes where guns are fired, the sound of the ricocheting bullets comes off as more realistic than any I have heard since Saving Private Ryan. And watch for the scene in which the airplane is firing a machine gun at Hannay as he runs across an open field, reminiscent of the airplane scene in Hitchcock’s North By Northwest.

The role of Victoria is an innovation that works very well in this adaptation. She is a suffragette who meets Hannay at a political meeting for which he is the speaker, having been mistaken for the real orator. Over his protests she joins him in his journey and (of course) a hint of romance begins. She turns out to be highly resourceful and is critical to his escaping his most dangerous predicaments. We find out later in the film that she is a special agent for British Intelligence and has been tagging along with Hannay to offer her assistance.

The words “39 Steps” are written in the notebook in invisible ink. That refers to a series of stairs that lead from a house down to a dock on the edge of a Scottish loch. At a specified time, a German U-Boat arrives in the loch to pick up a double agent who has memorized the British naval plans (an element drawn from the first two films in this sequence). The U-Boat rising out of the loch is very effective, although it appears to resemble a vessel from 1942 rather than 1914, but I’m no expert.

The Nazi agents are prevented from leaving, but in the process Victoria is shot and falls into the loch, not to be found (apparently). The final scene shows Hannay has enlisted in the war effort, and has a brief encounter with the mysterious Victoria, who must continue her work, and Hannay is left with the hope of seeing her again after the war.

The chemistry between Hannay and Victoria works well in this version, as does the mystery surrounding Victoria. The chase scenes are more believable and the physical escapes more accessible to normal humans. This is a very good film, and a good adaptation of John Buchan’s novel. I don’t think I would ever fail to recommend a Hitchcock film, but this latest version of The 39 Steps is highly entertaining and well worth your time.