Hud - A Return to Roots 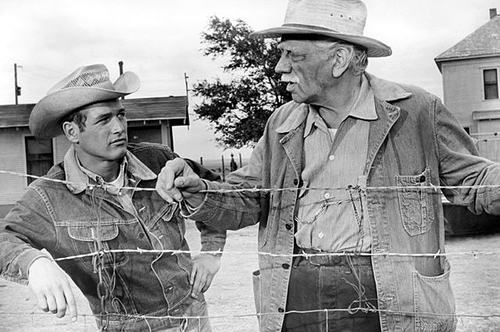 I spent my early years in north central Texas, Ft. Worth to be precise. Ft. Worth has been almost always overshadowed by the big city Dallas just down the road, and has carried the nickname "Cowtown" since its early days. It earned that title in part by being the home of a major meat-packing plant affectionately known as The Stockyards. I grew up on the north side of the city just a few miles from The Stockyards, and at one time that plant was an economic center of the town, employing over 1,000 people. Seeing cattle trucks driven by cowboys was a daily sight, complete with the fruity aroma that accompanies those animals. 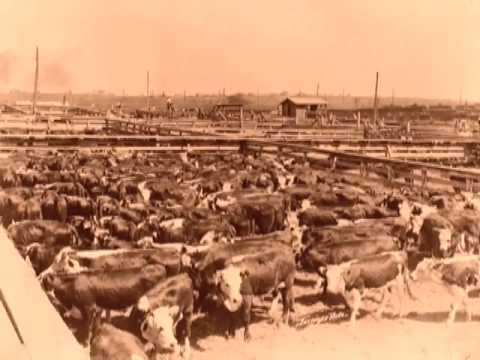 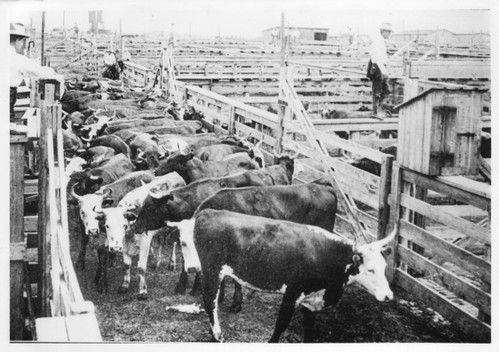 Ft. Worth Stockyards c.1960
My neighbors were cowboys and wore boots with their suits to church. Men wore work jeans topped with a fresh long-sleeve shirt with mother-of-pearl snaps. At age six I had a cowboy hat, and I learned to ride a horse in my early teens. Sometimes I would go out with my friends on weekends and run horses on open land.

The local cafe had a juke box, aluminum dinette tables and chairs, and served coffee in white porcelain mugs. The guy running for sheriff sat at the corner table with his cowboy hat still on and his over-sized belt buckle partially hidden by the overhang of his waist that stretched his white shirt. At its heart this was a cowboy town. 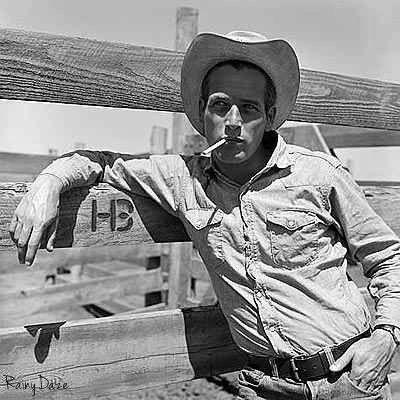 I look back on those days through a lens that tints everything as black and white. Our family '53 Chevy appears in grayscale, even though I know it was brown. On a hazy day the pale grain elevator on the horizon would blend in with the overcast sky. All the cars were old, even the newer ones.

These are the people and images I see in the film Hud (1963). The movie is set on a ranch in cattle country, and in the small town nearby. Hud Bannon (Paul Newman) works on the ranch owned by his father Homer (Melvyn Douglas). Hud and Homer are polar opposites, which explains the black-and-white cinematography and creating the core of the film's conflict. Homer is the picture of honesty and decency, while Hud is self-centered and arrogant. He is "an undisciplined man," as his father calls him. If Hud has any friends, they are only for the short-term. Hud's seventeen-year-old nephew Lonnie (Brandon DeWilde) is pulled between the decent but staid life of his grandfather Homer and the lively but unprincipled life of Uncle Hud. I recognize that conflict from my own family growing up.

I know Alma, too. Alma Brown (Patricia Neal) is the housekeeper/cook at the ranch. She is probably a composite of people I remember from my youth, but I recognize her. She is divorced and a little flirty. She seems to enjoy being the only woman in the household. At the end of a day of hard work she likes to sit on the porch swing and put her feet up while the others eat the ice cream she cranked out by hand.

I also know that shack she lives in off the main house, with the bare light bulb hanging in the middle of the only room and the electrical cord running across the ceiling and down to the plug in the wall. Behind the clothesline at one end of the room is a closet with a shower curtain for a door.

The small town near the ranch is one I have been in many times, I believe. The downtown consists mainly of a gas station, a few stores and a cafe/bar. In the drugstore is book rack that twirls around, full of pulp paperbacks. I spot a copy of William Shirer's The Rise And Fall Of The Third Reich, the same red-covered copy that I once read.

When Alma leaves town late in the film, we see her sitting with a small suitcase on a wooden bench outside the bus station office waiting for the bus to Dallas. I have seen that bus with its rusty door hinges and dusty windows half open to catch a breeze. I probably rode in it somewhere.

Over all of these familiar images is a story that divides the family. When the cattle are found to be diseased. Hud wants to sell the herd quickly before anyone hears about it, but Homer has the herd destroyed and buried by a bulldozer. The final blow is when Homer personally shoots the two lone long-horns that he has had for pets for many years. With that final destruction, Homer has destroyed what has kept him living. After an apparently minor accident, he gives up and dies, being held by his grandson Lonnie, not his son Hud.

Following Homer's funeral, Lonnie packs a light bag and leaves the ranch on foot. He has had enough and walks away, even refusing a ride from Hud. The final scene sees Hud cracking open a beer and walking into an empty house, with no ranch hands and no family.

Hud is an excellent film, being called "nearly perfect" by some reviewers. The project was in  the capable hands of Director Martin Ritt (Norma Rae, Sounder, The Spy Who Came In From The Cold). It was nominated for seven Oscars, and won the Oscars for Best Leading Actress (Patricia Neal), Best Supporting Actor (Melvyn Douglas), and Best Black And White Cinematography. Melvyn Douglas' performance is probably the best of his career.

This ensemble created a film with enduring images of people in conflict in a black-and-white world. I don't like to remember everything from my black-and-white world of years ago. But I do have a bit of nostalgia for the roots from which I came, and I enjoy Hud taking me back there every once in a while.
Posted in Drama